New electronic toy (and a whole new world out there) 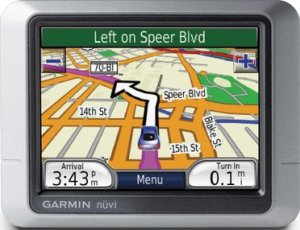 My GPS unit, the Garmin Nüvi 260. It's a basic model but the maps are the same as in the more expensive models. OK, it can't play MP3s or connect to my mobile phone via Bluetooth. Tough.

My birthday present from Liz this week was something I’ve been intrigued with for some time, but lacked real justification for buying: a car GPS unit. It’s a Garmin Nüvi that works in the car and can be carried on foot as well. So far it hasn’t been needed for guidance to unknown addresses, but it accurately directed me home from work and from Wellington to Martinborough.

The time will come when it will be useful as well as fascinating – I find ordinary maps difficult to use in the car because I need reading glasses to read them. 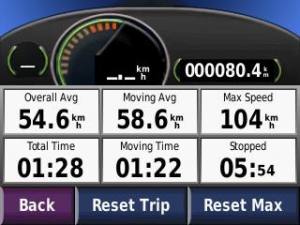 The Garmin GPS unit can give you a summary of a trip taken. This was from downtown Wellington to our cottage in Martinborough, after work last night. It felt a particularly slow trip and the Garmin proved that it was.

Early this morning I listened to the BBC’s Digital Planet radio programme and appropriately it was all about applications of GPS, combined with computer technology. A lot of it seemed to be mixed up with Google – those guys are everywhere.

One thing they talked about was geocaching – a whole new world of human endeavour I have been entirely ignorant of. And will be happy to remain largely ignorant of, though it’s interesting to see new directions geekery can move in.

Wikipedia describes geocaching as “an outdoor treasure-hunting game in which the participants use a Global Positioning System receiver or other navigational techniques to hide and seek containers (called ‘geocaches’ or ‘caches’) anywhere in the world. A typical cache is a small waterproof container containing a logbook and “treasure”, usually toys or trinkets of little monetary value.” 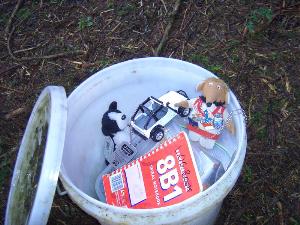 A geocache found near Wainuiomata. (Not by me!)

Apparently there are three-quarters of a million geocache sites in the world and we have our share in New Zealand. There’s an article about local geocaching activity here in NZ Tramper. More information at Geocache.geek.nz.

I also discovered a sister activity called letterboxing that is also concerned with finding things in the great outdoors, but without any GPS gadgetry. Adherents probably feel superior to the technology-assisted geocaching crowd. For the ultimate expression of this lunacy, visit the Letterboxing with Mark and Sue blog.

It’s amazing what people get up to.

Update: we just went on a trip up the road to Greytown with Liz driving to an address she had never been to before. It was good we knew the area well because a couple of turning instructions along the way were seriously wrong. Hopefully it’s more accurate in cities – it seemed to be OK in Wellington earlier this week.

This entry was posted in Geocaching, GPS, Outdoor pursuits. Bookmark the permalink.