There were no business commitments on the day we arrived in Seoul and Alex, our host, arranged for us to visit the the Korean Folk Village, a living museum in the city of Yongin, part of the broader Seoul Metropolitan Area. Even though it was a ‘canned’ tourist attraction, it was well done and very interesting. It was large – over 260 traditional houses plus gardens, set in 240 acres. Established over 30 years ago, it has developed some patina of age, while being extremely well maintained.

The village has a wide variety of buildings: traditional houses of the different social classes, farm buildings, community facilities etc. It was early summer when we were there and the deciduous trees were green and lush. 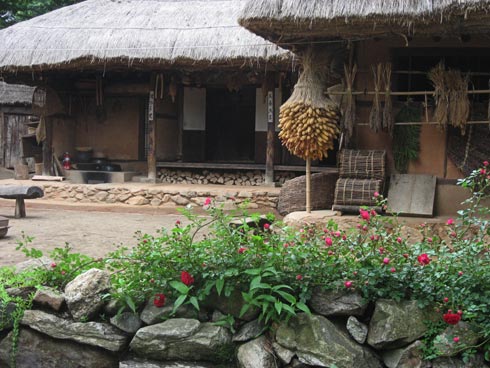 Close-up of one of the houses. The dangling yellow things are corncobs.

Extensive areas of gardens were still being worked. Click on it to see an enlarged version. Throughout the village, people dressed in traditional costume demonstrated traditional crafts and activities.

Our charming guide who travelled with us from Seoul and explained the village to us. Here she is demonstrating a traditional method of ironing cloth: beating it. She was dumfounded when Alex told her his grandmother used the same method. She simply couldn't believe that such activities could be within living memory. 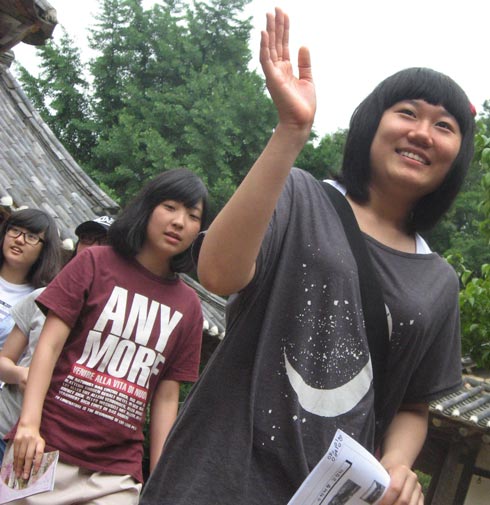 Several school groups were at the folk museum.

Below is a short video of musicians at the Korean Folk Village. The dancing percussionists were accompanied by a single player of the taepyeongso, also known as hojok or hojeok. It is a double reed wind instrument in the shawm or oboe family.

This entry was posted in Korea and tagged Korean folk village. Bookmark the permalink.