Tino Rangatiratanga flag should be for all of us

Maori people are currently debating which flag, from a number of  options, should be adopted as a Maori flag to fly alongside the New Zealand flag on Waitangi Day. Apart from one design, they are  awful.

But the best of them is actually damn good and should be adopted as the flag for everyone in New Zealand. 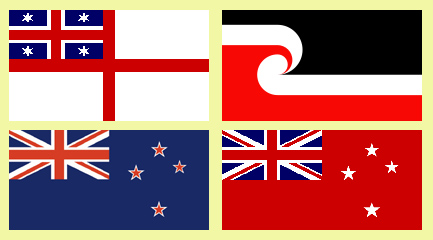 The Flag of the Independent Tribes was first used in 1834 and even served as a kind of national flag until the signing of the Treaty of Waitangi in 1840. It’s a ghastly bit of cobbling-together. Also offered as sacrificial victims in the Maori flag-choosing process are the current NZ national flag and the Red Ensign. They’re as likely to be chosen as Hone Harawira is to join the ACT Party.

Which leaves just one: the Maori Flag, aka the Tino Rangatiratanga flag. It’s a great flag – simple, stylish, flies well and, with its koru motif, recognisably ours. I’ve yet to find anyone who doesn’t like the design, even if some people wouldn’t want it because of separatist connotations fanned by Maori and Pakeha racists.

Let’s neutralise the separatist connotation by making it the flag for everyone.

If we make it everyone’s flag, it can still be a little bit separatist. By moving on from the Union Jack, it can symbolise our final separation from Britain. (To be followed, asap, by turfing the British monarch as our head of state, and ditching other remnants of colonial cringe.)

The Tino Rangatiratanga flag is much better than the fern motif flag being pushed by Lloyd Morrison and others at NZFlag.com. I’m sick and tired of NZ being represented internationally by black imagery. It must come across to people outside New Zealand as monochromatic, boring and negative. We need some colour. The Tino Rangatiratanga flag gives us colour, but retains enough black to keep the Darth Vader brigade happy.

Personally I’ve long wanted the Hundertwasser flag as our national flag. Indeed, I own a Hundertwasser flag and fly it in my office. But I’m realistic enough to concede it won’t get the nod now. The Tino Rangatiratanga flag is next best in my opinion, and I’d be more than happy to be represented by it at a future Olympic Games.

Though the NZFlag website mainly pushes its favoured design, it does present alternatives, including the other flags I’ve mentioned. Morrison also explains very well why we need a distinctive New Zealand flag. His heart’s in the right place, even if his flag is wrong. 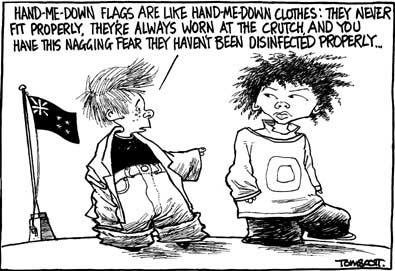