eBooks and the iPad – implications for publishers

There’s much talk overseas about the new Apple iPad taking over from established e-readers like the Amazon Kindle, and finally persuading the masses to read books on an electronic tablet instead of paper. This may or may not be correct, but if it is,  there are big implications for people in my line of work: book publishing.

iBooks application on an Apple iPad – selection screen on the left and an actual book on the right. The unit can be tipped sideways to view books in 'landscape' mode.

Until now, e-books have been monochrome text-heavy affairs with limited use of graphics in very simple layouts. The iPad – and its imitators – change that because they have full colour LCD screens plus technologies that facilitate more imaginative design. That means illustration-heavy books can now join the e-book category.

Though my world is bound up with producing and reading books on paper, I’m not averse to e-books. I’ve been reading them for several years on my mobile phones, using add-in Libris eBook Reader software. They are very readable as plain text and useful when you have time to kill.

I could read books on my Asus Eee netbook, but a folding laptop shape isn’t as convenient as a one-piece tablet shape. Also the Eee’s battery only lasts for three hours. The iPad’s 12-hour battery would be more practical. 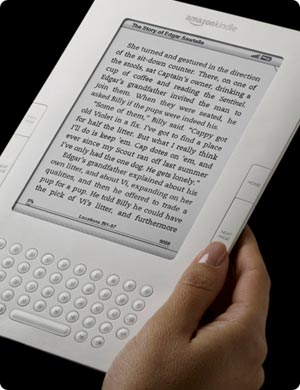 I’ve seen the Kindle, which uses reflective ‘e-ink’ that looks much more like printer’s ink on paper, and can be used outdoors in bright light (but obviously not in dim light, when an LCD screen would be much better). E-ink is more natural than having a back-lit LCD screen projecting text at your eyes.

Some critics of LCD screen technology say it’s the difference between reading something on paper and staring into a fluorescent tube. That’s a bit extreme, but I do think long periods reading an iPad’s LCD screen would be tiring. It wouldn’t be much of a problem for me though. In my semi-dotage I can’t read books printed on paper for many hours at a stretch anyway, the way I could when I was a kid. I fall asleep.

But I have no problems reading online magazines on my netbook for a couple of hours in bed on a Saturday morning. That’s as long as I want to read a print novel in a single session, so I think the iPad would be fine for me. However, my netbook does have a lovely matte LCD screen. Indeed it’s the first computer I’ve owned that is comfortable for reading extended articles in bed or on the sofa, in terms of the screen, size and weight. Unlike the Eee, the iPad’s screen is covered by nasty shiny glass, and that would force me to find  reading spots away from distracting reflections.

An e-book has other niceties compared to a print book – like being able to insert electronic bookmarks, search within the text, check things via Google or Wikipedia, and more. I might not use those extra capabilities much, other than marking where I last stopped reading. But…it would be nice to know the raw power was there if I  needed it! Other advantages of an electronic format would include being able to insert links to other sources of information or other books. You could insert video clips and even make the book’s images sing and dance. For an extreme version of the latter, take a look  at this YouTube video of Alice in Wonderland on the iPad.

Implications for book producers
The colour and graphics capabilities of the iPad have considerable implications for the publishing world I work in. To date I’ve not been interested in e-book publishing because it has been largely text oriented, whereas I produce books that have many illustrations – often in colour –  and sometimes complex layouts.

The iPad looks like a suitable platform for my kind of publishing, but it comes with a considerable drawback: designing pages for electronic presentation on a computer screen is trickier than designing for print production. It’s certainly much harder to produce stable, nice design in electronic web publishing, which I also do a bit of.

You can lay web pages out in what-you-see-is-what-you-get (wysiwyg) mode using applications something like Dreamweaver or Front Page, but unless you go beyond wysiwyg mode, it’s hard to achieve fine and subtle placement of elements on a page. If you go beyond wysiwyg, you have to write or at least tweak code and know a lot about things that are intrinsically (to me anyway) very boring. I don’t get off on this sort of thing, which comes from an ePub file:

I had to type stuff like that in my Apple II word processor back in 1982, to indicate things like carriage returns, page breaks, boldface, italic etc. By 1985 it was a distant memory in word processing, and it surprises me that you still have to worry about such things today when producing for books that will be displayed on a screen rather than paper. Sure, most of what appears above would have been generated automatically in a semi wysiwyg ePub editor, but you still have to understand this stuff in order to tweak anything outside very plain layout. Undoubtedly fancy language like this exists out of sight and deep inside InDesign pages, but you don’t need to see it or even know about it.

The people I know in traditional book publishing wouldn’t enjoy this sort of jiggery-pokery. They produce pages for printers, using programs like InDesign that let you place elements on a page, precisely where  you want them to be.  They know the elements will stay where they put them and look how they intended them to look. Every time. There’s a some technical stuff and computer understanding involved, but essentially InDesign or Quark for print publishing are artists’ tools rather than coders’ tools.

The problem is compounded if you are producing e-pages that will be seen on screens with varying resolutions. A layout that looks OK at one resolution may be all over the place in a different resolution. If Apple establishes an e-book reader resolution standard with its 1024 x 768 pixels iPad, that would help publishers no end.

Publishers will still want – for many years – to produce paper versions of their books as well as electronic versions, so, at least in the short term, they will be forced to apply separate production processes to every book they want to publish on both platforms. What a hassle.

I hope Adobe is working on a version of InDesign that can do layout for both screen and print. Layout that is wysiwyg for the whole job, so you don’t have to write or adjust code. It will be a tall order, but hopefully it will be done.

I guess we could get around the difficulty of designing books for an electronic tablet by turning pages into PDFs, which always look the same whether they are displayed on a screen or printed. But despite Adobe’s hopes, electronic books are not going the PDF way. From what I can see, the e-book industry is all about constructing books via electronic page markup language.

Designing and producing this page in InDesign for print production was straightforward. It would be more difficult getting the page to look just like this on an e-reader. This page shape, being long and narrow, would not suit the screen proportions of an iPad.

There is another problem for publishers who want to produce books in both print and electronic formats. Producing for a screen may be more restrictive – you’d need to design a book to fit the shape of the screen it is going to display on, and if you follow the page-turning metaphor Apple has introduced with iBooks, each page should be visible on the screen in its entirety. It seems to me – though I’ve yet to see an iBook in action – that vertical scrolling to accommodate a non-standard shape page would defeat the Apple page-turning system.

A print publisher can have any shape he or she wants. So a publishing house may need to produce quite different layouts, or else move everything to the standard dictated by an e-reader screen.

Am I at the wrong end of my publishing career to be bothered with all this?

[Since I wrote this, there have been other web discussion about designing for the iPad page. One of the more interesting posts, in the FontFeed blog, points out the severe limitations of the current iPad in terms of typography. It seems it doesn’t even allow hyphenation, let alone ragged right typesetting. Read the post here.]

1 Response to eBooks and the iPad – implications for publishers