If your ears entered this world after the very early ’70s, move on now to avoid embarassment. If you were born by then, you may remember the stuff I’m writing about from your olds’ record collections, Happy Days on TV and residual outings on the radio.

If you were somewhere between a kid and a teenager during the ’50s and early ’60s, stick around. This is about songs that may evoke powerful memories: who you were; where you were; what you were doing; who you were doing it to (or hopelessly hoped to be doing it to); dancing the last dance and hoping she’d agree to go home with you; grooving to the Lever Hit Parade on your first transistor radio: 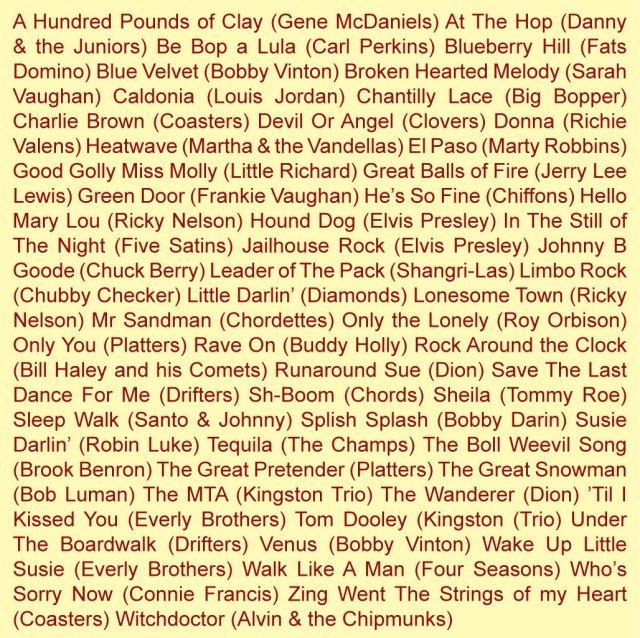 Every so often I enjoy re-living those days, courtesy of Ron Norwood’s Doo-Wop Express internet radio station in Oregon, USA. All the songs above came from the station’s playlist and they stream out  in good quality, 24 hours a day, seven days a week, all year long. It’s free as the air you breathe – well apart the bandwidth it consumes on a capped broadband account. Ron does a wonderful public service. His isn’t the only internet station that plays the ‘oldies’ category, but it’s the best I’ve heard.

How do you tune in? There are several ways. One is to go the the Doo-Wop Express website and click on Listen Now. Another way is to click here: A little window will appear on your browser screen asking which media player you want to open the Doo-Wop Express in. Windows Media Player may be mentioned, or other players if you have them installed.

My main player is Winamp, a free player I’ve enjoyed for years. One nice thing about Winamp is that you can bookmark a radio station you’ve tuned into, so you can go straight to it in future. It also has access to hundreds if not thousands of other internet radio stations through a link to the Shoutcast Radio service. That’s how I discovered the Doo-Wop Express in the first place.

The Doo-Wop Express website includes Video of the Day links to original performances on YouTube. Here are a couple:

Good question. Maybe we have moved on, though faced with a choice between bomp shoo bomp and mother-fucker rap lyrics, call me old-fashioned. I’ll opt for the gentler days of silly doo-wop.