Back with a (virtual) band

I’m back with a band again. It’s the old John MacGibbon Trio of the late sixties and early seventies, revived with a better bass player and drummer.

Unfortunately they’re virtual players – you can’t go down to the Muso’s Club in Wigan Street with them after a gig. (Not that the Musos’ Club has been there for many years anyway.) These new players come courtesy of the most expensive app I’ve bought yet for the iPad: iRealbook. It cost a whole US$20 and it’s fantastic value for money.

The iRealbook is a collection of chord charts for commonly played jazz and nightclub standards – the kind of stuff I cut my musical teeth on. There are no melody lines (‘dots’ to musos), but you can choose any one of 900 tunes and have the chord charts displayed in a very readable form. As an ‘ear’ player, chords are usually enough for me if the melody is in my head. In my former bands, chord charts were what we used – when we needed paper aids at all. (Yes I could read dots but they were a pain in the butt on a busy bandstand and often led to stilted playing.) 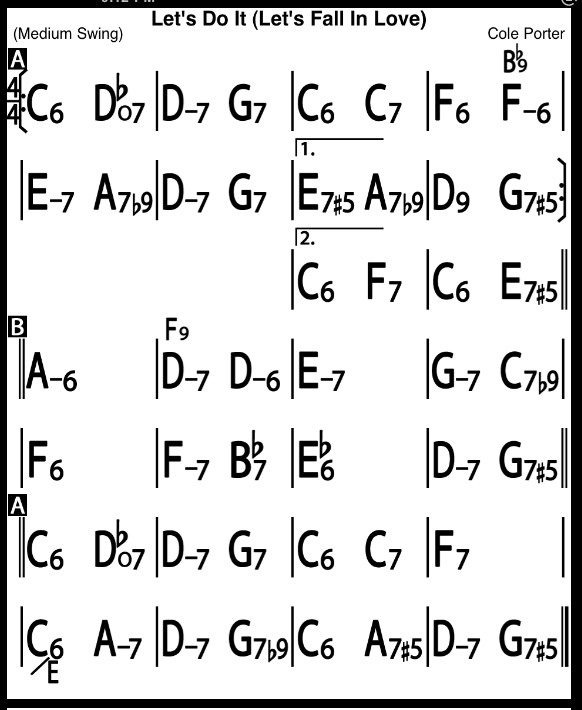 Chart from iReal Book – one of 900 tunes now available

You can search for, or scroll to a particular tune, which will first be displayed in the ‘usual’ key used by most musicians when they get together and jam. But the tunes can all be transposed to any key. I’d have loved that facility when visiting singers asked us to play in awkward keys. (Mind you, if they asked us to play E major (awkward if you’re not a guitarist), you could put it up or down a semitone to an easier key and they wouldn’t notice.)

Nine hundred songs in 12 keys means I have 10,800 separate charts on my iPad. Large and readable on a music stand.

Most of the chord changes in the songs include ‘substitute chords’ that add interest, but might upset people who like things to stay simple, as originally writ. Not to worry – such folk probably aren’t going to handle chord charts anyway.

The system includes an online user forum, within which people can discuss music and contribute new charts. Most of the participants seem to be active professional musos. Contributed charts may be discussed and they go through a moderation process before being added to the main library in program updates. 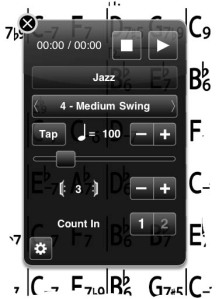 The pop-up control panel I launch my 'band' from. Each chart suggests a tempo and style, but these can be altered.

Where do my musicians come from? Well shortly after I got the app, the company added an accompaniment module that has piano, bass and drums playing along to each of the charts, in each of the keys. They are good and they sound realistic. They are actually recorded sample from real musicians. You can alter the relative volume of each instrument, so I turn the piano comping off altogether and play along with just the bass and drums, hooked up to an amplifier.

It’s astonishing value. The main iReal Book program cost US$12 and the playalong module was another US$8. Compare that to Music Minus One CDs which, for $25 or so, give you only ten or so tunes in a single key. The system is also available on the iTouch, iPhone and Android platforms. Obviously the big screen of an iPad would be best, but the chord symbols are so large and clear that you might get away with using an iPhone-size screen.

Here are some of the songs I’ve been playing with my new group. So far I haven’t got past ‘m’ in the alphabet.

Ain’t Misbehaving, All of Me, Almost Like Being in Love, As Time Goes By, Begin the Beguine, Besame Mucho, Bill Bailey, Blue Room, Bluesette, C’est Si Bon, The Charleston, Do Nothing ’til You Hear From Me, No More Blues, Chicago, Days of Wine and Roses, Desafinado, Django, Don’t Blame Me, Don’t Get Around Much Anymore, Fly Me To the Moon, A Foggy Day, Georgia on my Mind, Girl from Ipanema, Have You Met Miss Jones, I Love Paris, I’m in the Mood For Love, Route 66, Sunny, Shanty in Old Shanty Town, Let’s Do it, Manha De Carnaval, Night and Day, Manhattan, Lean On Me, Mercy, Mercy, Mercy.

Yeah – showing my age a bit. Actually I did have more modern repertoire including rock ‘n roll and country when I played commercially, but this collection is mostly older standards, plus be-bop and hit jazz singles from the 50s to 80s. There are a few older rock standards from people like Stevie Wonder and the Beatles. [Update: the system is evolving and various rock, country and latin rhythms have been added.]

This entry was posted in 50s nostalgia, Jazz, Music. Bookmark the permalink.