eBooks on a huge roll

As well as that, Amazon announced that in the same period it sold more Kindles (its ebook reader) than any other single item from its catalogue. The next biggest seller was the final Harry Potter book.

I helped them by importing a Kindle, which I gave to Liz for Christmas. She’s been wedded to it ever since and has read quite a few books on it.

One of my sons says that since Christmas he’s been seeing quite a few people – mostly middle aged women – using ereaders on the Brooklyn bus. So Liz wasn’t the only local who found an ereader under the Christmas tree. We’re still well behind the USA, but ebook reading seems to be taking off in New Zealand.

Probably most of the bus travellers would have been using the Kobo reader, which has been available from Whitcoulls and Borders since last April. Some may have had Sony readers, which the same stores have stocked since late last year. Few would have had the Kindle, which in America far outsells the rest. The Amazon store only recently consented to supply New Zealand.

I bought Liz’s Kindle from the Amazon store and had it sent direct to a US friend, who then re-posted it to me. The total cost was about NZ$199 including postage. As of today, if I got Amazon to post it to me direct,  it would cost NZ$215 all-up.

The basic Kobo costs $199 – exactly what I paid for the much better Kindle. The Kindle is better for a number of reasons, not least that it has wireless internet capability, which means Liz can have order books on her Kindle and have them sent directly into her Kindle. With the Kobo, she’d have to download books to a computer and then transfer them to the Kindle via a USB cable. Also nice is that when she buys a book from Amazon for her Kindle, it’s also available to the Kindle app on my iPad.

If she wants to check out any words or subject areas from a book she’s reading on Wikipedia or elsewhere, she can, through the built-in internet connection. (Though less conveniently than on the iPad’s iBooks reader).  These niceties are not available with the basic Kobo, which has no wireless capability. 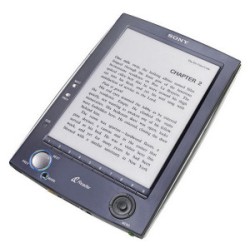 A wireless version of the Kobo came out recently, but at $250 it’s much more expensive than the Kindle. While delivering less.

Far more books are available for the the Kindle, and judging from comparisons I’ve done, the Kindle is  cheaper, for the same title. Similar drawbacks apply to the Sony, which is ridiculously more expensive, at $399. There’s another common e-ink reader in the USA: the Barnes & Noble Nook. It’s not available in New Zealand.

Bang for buck, if all you want to do is read books, all of these readers are probably better than the expensive iPad, but then the iPad does much more than display books. So much more that I had the iPad for three months before I read my first book – I kept getting diverted to other things: news and magazine media, video, music, games and so on. But I started reading novels during the Christmas holidays and haven’t looked back.

iBooks on the iPad, in landscape mode showing a two-page spread. It is also possible to hold the iPad vertically and see a single page at a size similar to a real paperback book. This example shows illustrations in a very simple layout. which is about as far as you can go with current ebook layout without really fancy (and therefore largely uneconomic) code-writing.

Amazon claims on its website, at great length, that e-ink technology (shared with the Kobo and Sony) is easier on the eyes. As well as that, Amazon quotes a study that says reading a backlit screen, as on the iPad, before going to bed inhibits melatonin production, which is critical for a good night’s sleep. Well maybe…so far I’m having no problem with eye strain or with getting off to sleep at night.

The iPad has a big advantage over the other readers in that you can load several ebook apps on it. I regularly read in the Kindle app as well as in iBooks. The iPad also lets me install both commercial and free books in the widely used ePub format. Both systems let me read PDFs, but the iPad is superior because it has a much bigger screen. (For PDFs to be readable on a six inch e-ink screen, you have to enlarge the pages, which then become wider than the screen itself, forcing you to scroll around to read everything. A royal pain in the neck.) A properly formatted native ebook can have its text enlarged without the words running off the screen. Another plus for iBooks is that it can use colour, though that’s generally not something you’d worry about in books that are largely text, like novels or memoirs.

Against all this, the iPad is significantly heavier. I sometimes look jealously at Liz toting her feather-light unit. Nevertheless, I find iPad’s weight bearable – you just have to learn effective ways of holding or propping the iPad up while you’re reading.

Liz’s Kindle is much better than my iPad outdoors or in our bright back porch. This is because e-ink screens are ‘reflective’, like a regular book. In such situations the iPad is hopeless. The bright light washes out the image and reflections on the shiny glass screen are very annoying. But the iPad beats the Kindle handily in low-light situations such as aircraft cabins.

She likes hers. I like mine. For our money, both  give a better reading experience than a real paper book – as long as the book is text-heavy. Books that emphasise illustrations and good design are still far better in traditional form.

2 Responses to eBooks on a huge roll