All Whites Team of the Year award a joke 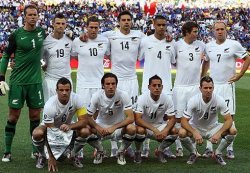 The All Whites’ Team of the Year award is a joke. They scraped into the World Cup finals through the easy part of the draw. Once at the finals, they didn’t win a single game.

They ‘achieved’ three draws, but on each occasion it was well against the broad run of play. They didn’t draw because they were as good as their opponents. They drew because soccer is a peculiar game that too often produces low scores or draws that don’t reflect what actually happened on the pitch.

I’ve had it up to here with the continued adulation for this team, which which may have done well by New Zealand standards but in world lterms is only mediocre. Get a perspective guys! At least one the the judges, Dick Tayler, saw the hype for what it was and resigned in protest. Good on him.

I won’t even list the teams that should have won the team of the year award. Pick any one of many that deserved it more than the All Whites.

This entry was posted in Football, Soccer. Bookmark the permalink.