It was  dramatic – the huge inky black cloud coming up Wellington Harbour as I drove back to my office. Then suddenly the cloud was upon us, accompanied by thunder, lightning and the heaviest hail I’ve seen here for many years. I took these photos with my cellphone after I got the car safely into the carpark. The hail continued  after I took these photos and became thicker on the ground.

Intersection of Featherston and Brandon Streets, Wellington. We're hoping the hail didn't also fall in Martinborough, across the Rimutakas. For the sake of both our garden and the local vineyards. 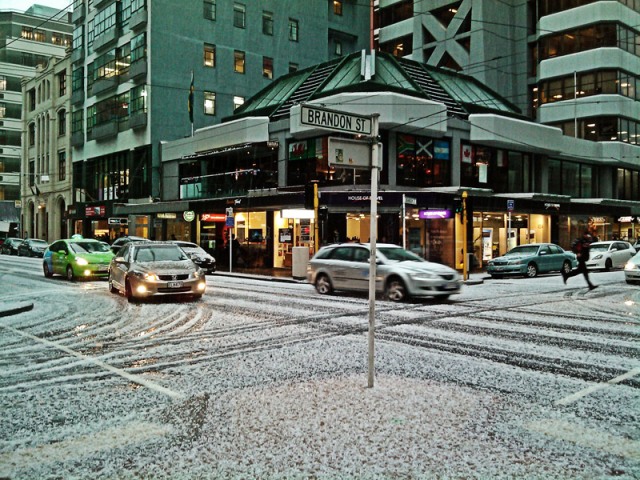 Another view of the Featherston/Brandon Streets intersection. At top right is the former Wool House where I used to work, now renamed Deloittes House.

This was an interesting lunchtime diversion and it provided plenty of pictures for national TV news. But let’s put it in perspective: it was absolutely nothing compared with the 1947 and 1999 hailstorms in Sydney. In 1947, hailstones 8cm (3.1 inches) in diameter lashed beaches on New Year’s Day. Because of the holiday, beaches were crowded and as most people had arrived by public transport, they couldn’t shelter in their cars. There was only limited shelter at the beaches themselves, which ran with blood. Many people were taken to hospital. The 1999 hailstorm caused less personal injury but overall damage was worse: the A$1.7 billion in insured damage set a new record as Australia’s costliest natural disaster.