I’ve just finished reading my first print on paper book this year. Cover-to-cover reading, that is – I still refer to printed books professionally and I still produce them in my own publishing business. But other than that, it’s been Kindle all the way for personal reading until this week.

The odd book out was A street cat named Bob: how one man and his cat found hope on the streets, by London street busker and magazine seller James Bowen, published in March by Hodder and Stoughton. Liz saw it in the Martinborough Library and knew she had to bring it home. We once had a large much beloved cat named Bob and he was red, just like Bob in the book. Our Bob was a red Burmese and the book Bob was a red tabby but a red cat is a red cat, particularly if it’s called Bob. 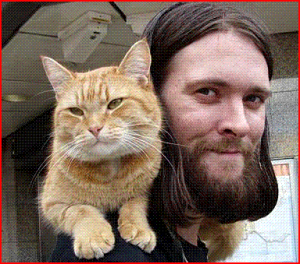 Street cat Bob turned up in a manky state at Bowen’s sheltered housing and asked to be friends. Bowen was in a manky state himself, on a methadone programme while trying to recover from heroin addiction. He was eking out a bare living busking in Covent Garden. The book is a heartwarming story of mutual support that led to a better life for both of them –with some dodgy horrors along the way.

From the start, Bob insisted on going to work with Bowen and sitting beside him on the pavement while he performed – and later sold copies of Big Issue magazine. Bob was friendly, the crowds liked him and he was good for business.

Most important from Bowen’s point of view was that being responsible for another creature encouraged him to take a less depressed and self-absorbed approach to his own life.

Our current cat Chino snug in bed this morning with a street cat named Bob close by. (Click to enlarge)

Bowen and Bob became minor celebrities and today there are dozens of photos and videos of them on the Web. Then came the book, written in conjunction with Gary Jenkins. It’s a nice book – simply written, devoid of literary attitude and very readable. OK, I did feel like applying my editor’s red pencil from time to time, but the book works. In fact it topped the Times and Sunday Times best seller lists for a while.

I’d agree with the Times reviewer who said it was “an instantly bestselling memoir that, beside its heart-warming tale of their friendship, offers an insight into the injustice of life on the streets that’s by turns frustrating and life-affirming.”