Our roof is now all in place, though not finished. The weatherboards etc still need to be replaced and tidied up where the new roof butts on to the main part of the existing house. And the insulation has to be put in. Next week the weatherboards, doors and windows should be installed. Then the gib lining will go on if the building inspector says the framing timber is dry enough.

Over the last three weeks the weather has been as kind as it was awful earlier. Bruce has been particularly lucky during roof construction that there has been little wind and not much rain.

New roof above the north decking

East verandah looking from the north to where the new back door will be.

New roof on west side, looking from the north. Unfortunately it has to join the main part of the existing house about 200mm higher than the edge of existing roof. This was necessary because the pitch of the lean-to roof had to meet a legal minimum, and on the north end of the new room, the ceiling at to be at least 2.4m from the floor. Sticking up the way it does, looks awkward, but this side of the house is not very visible. Fortunately it is not an issue on the other side of the house, where it would be visible.

West side of the house, looking north. The three parts of the new roof are nicely in-line.

Above the new lean-to roof showing where it butts onto the existing house. Still work to be done up there. 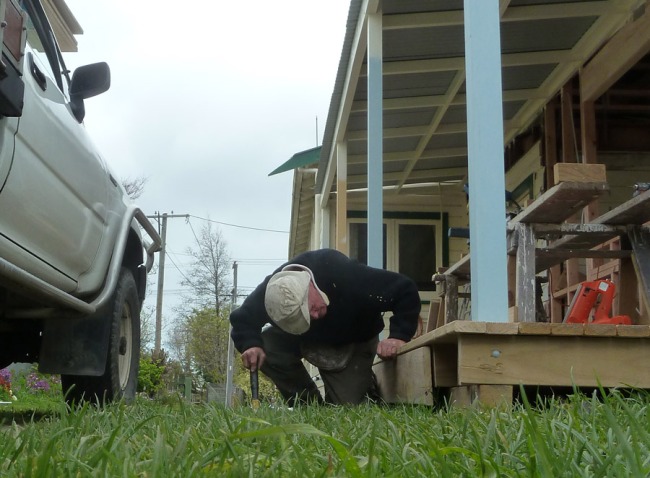 Bruce nailing up side boards on the new decking.

Bill again. I spent a fair bit of today working out more precisely where power points, light switches and light fittings will go, renewing the plans for this and discussing them with Bill. As well as wiring up the new part of the house, Bill is tidying up the ratsnest of wiring in the old part of the house and installing new power points, switches and lights. Earlier in the week, Wayne Thomas started work on wiring for internet and television. We’ll have three TVs in the house (one unexpected 24 inch set got thrown in for nothing in the Panasonic heat pump deal we opted for and it’s going in the bedroom). All TVs will have access to the satellite Sky service without having to pay Sky additional rental for their multi-room option.

1 Response to Roof’s up