Chromecast update gives me all I can eat

Google sent me a Chromecast app update last night and I had great fun as a result. I was able to send anything I could see on my Nexus 7 tablet to our TV screen. 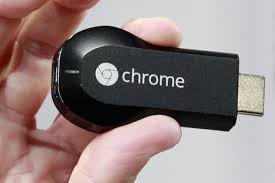 What makes it all possible: the Chromecast dongle that plugs into an HDMI port on the back of a TV. It links to my Android devices via the Chromecast app.

Previously this ability to ‘cast’ from my tablet to the TV screen had been limited to a few apps that had been made compatible. Most weren’t, though we have enjoyed watching YouTube on the big screen.

After firing up the Chromecast update, we spent most of the evening using Google’s marvellous Photos app, which has had access to all my photos since I sent the large collection to Google Drive. 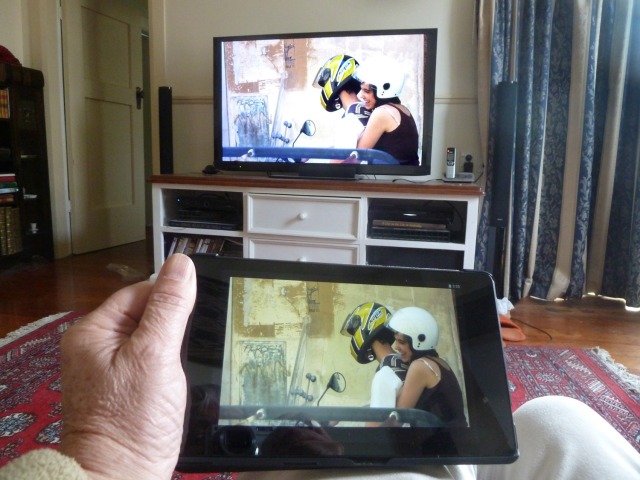 A Florentian couple on a motor scooter, sent from my Google Drive cloud to my TV set via Google’s Photos and Chromecast apps.

I previously casted photos via a couple of Chromecast-compatible graphics apps. Those apps have now been uninstalled. The photos had been fairly slow to arrive from the cloud and they drew themselves onto the screen jerkily. That was probably because the apps had been getting and displaying full resolution versions of the photos.

The Photos app seems to send cut-down versions to my tablet, though they are high enough resolution to look excellent on my 55 inch HD screen. They come through very quickly and I displayed them via Photos’ built-in slide show. At this stage the image transitions are pretty abrupt – there is no obvious way to select transitions like fade-out and in. That’s sure to come.

But I now have a big project – to go through all my photos and make sure their filenames include better information for searching. Photos is lightning fast at searching for keywords in filenames and assembling groups of photos. But it needs nore appropriate keywords than I mostly have.

For instance, I can’t search for ‘Canada’ and group all Canadian photos for a viewing session. Instead, their names are more closely descriptive, like ‘chipmunk, Revelstoke, 19790624.jpg’, stores in a folder called ‘Revelstoke’, which is inside another folder called ‘Canada 1979’.

As well as photographs, I was able to cast my videos to the big screen. Again via the Photos app, but I’m sure they’d have casted equally well from other apps.

Another bit of good news is that I was able to cast from my Spotify music app and take advantage of our home theatre system’s superior sound. Spotify has resisted Chromecast compatibility. (Or has Google been blocking it?) Now Spotify and all other streaming music service are available, whether they like it or not. That pleases me greatly. I can even set the music going through Spotify and then return to doing other things on my tablet.

Music and photography are considerable interests for me, so I’m feeling pretty smug about my decision a couple of years ago to switch from an iPad to an Android-powered Nexus 7 tablet.

I guess Apple will catch up, when Google deigns to give iPads and iPhones this all-you-can-eat Chromecasting ability.

I wrote about Chromecast as a new user last October, here.

This entry was posted in Chromecast, Nexus 7 and tagged Chromecast, Google, Photos app. Bookmark the permalink.