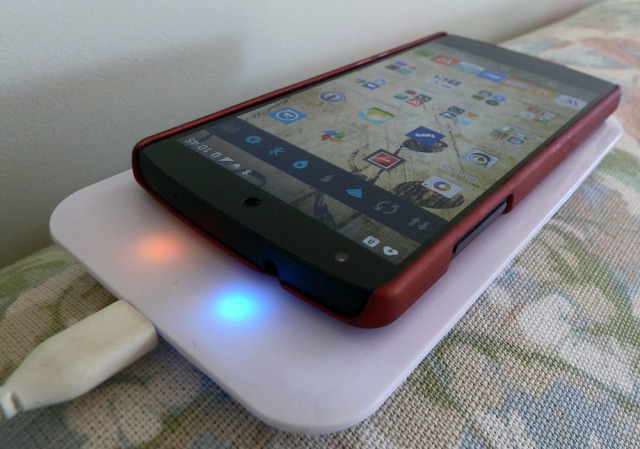 My Nexus 5 phone on its dirt-cheap no-name Qi charger mat.

Wireless charging of mobile devices with the Qi standard was supposed to be a next big thing, but it’s never really taken off. The standard hasn’t been adopted by either of the biggies – Apple and Samsung. The last few models of the Google Nexus phone and tablets have had it, but it never attracted me. The charger units were, and mostly still are, far too expensive for the convenience they offered.

But recently I checked at Aliexpress.com. This Chinese mailorder company had wireless charging mats at dirt-cheap prices. I scored one for US$4.10, postage free. Worth taking a punt at that price, I thought.

I thought right. The gizmo works and I love it. No more fiddling around working out the right way up to insert the micro USB charging cable. When I go to bed I place my phone on the pad, the blue light comes on and the phone makes a confirming noise. In the morning it is fully charged.

I’d still put up with manually inserting a cable if the charger mat wasn’t so cheap. I’ve seen the same or similar units on TradeMe for rip-off prices of $30 and way up. Not cost-effective.

This entry was posted in Uncategorized and tagged Qi wireless charger. Bookmark the permalink.