We recently scooted through the tiny town of New Denver, British Columbia. One of the highlights was a cute headquarters for the mighty Valley Voice – a bi-weekly newspaper that promotes itself as being proudly “100 percent independently and locally owned.” Good on ’em, and up yours, Rupert.

The windows were filled with community notices, which, among other things, advised of a public meeting about bears in the community, a ‘FibreFeelia’ textile arts get-together, a women’s wellness day, antiques fair, clothing exchange and scrap metals dealer.

Home to 500 residents, New Denver is in south-eastern BC, not far north of the US border. It is eight hours drive from Vancouver and 6.5 hours from Calgary, Alberta.

The town started out in 1892 and was originally called Eldorado. It expected to be the centre of a lead and silver mining boom. Then the name was changed, to claim an affinity with Denver, the genuine mining boom town in Colorado. Alas, New Denver’s boom was only mini and it petered out by 1920.

New Denver’s next raison d’être seems to have been hosting an internment camp for ethnic Japanese during World War II. That period is remembered at the town’s Nikkei Internment Memorial Centre.

Fast-forward to the Vietnam War when, being close to the US border, New Denver became a magnet for American draft-dodgers. 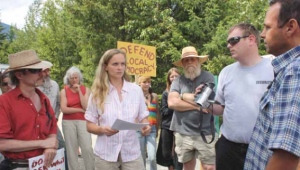 Locals protesting to the Telus installers in August 2010. (Photo: the Valley Voice)

Then the settlement achieved notoriety for being one of Canada’s last hold-outs against the new-fangled mobile phone. In a 2008 referendum, citizens voted against having a mobile service. Their beefs included alleged brain frazzling, and noisy phones preventing the town marketing itself as a tranquil cell-free sanctuary. Others may have just been reacting negatively to the arrogance of Canada’s national telco, Telus.

All to no avail. Two years later, Telus went ahead and installed the facility anyway, arriving in a phalanx of trucks that were met by a peaceful, but ineffective, citizens’ protest. 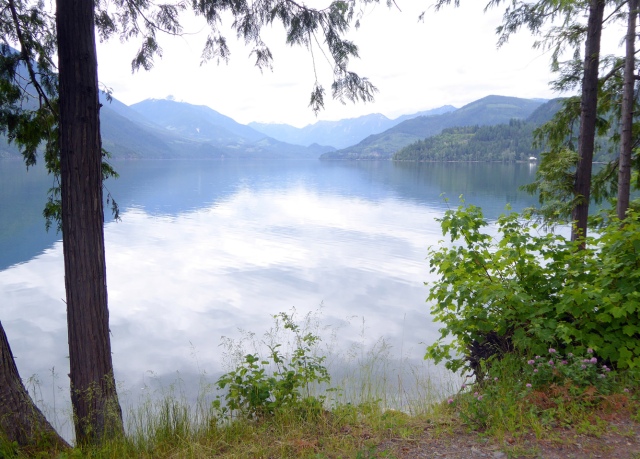 Slocum Lake, at the end of the main street, was tranquil, cell phones or not.