For the past few months I’ve been a voluntary coach at a New Zealand programme called Digital Seniors, which is being piloted here in Wairarapa.

Most of our advice and tweaking during the clinics we hold in the region’s towns relates to mobile devices.

I’ve come across some very messy and confusing home/launch screens on some of our Digital Seniors’ Android phones. Usually app icons are spread over several half-full pages and there’s been no attempt to group most-used apps together. Some of the apps that appear are ones the phone owners will never use – they typically have no idea why the icons are there or what they do. They are usually apps that the phone company (I’m looking at you, Samsung!) has pre-loaded and many of them are of little or no use.

While it’s possible to prune and re-arrange the icon mess in the phones’ own launchers, I recently went to the Android Play Store and investigated simplified launcher programs. There are quite a few of them.

Some use icons that are patronisingly large and some of the apps are either pay-for or contain advertising. After trying several of them I settled on the free and ad-free Simple Launcher, by Cloud Innovation Studio. I trialled it on my wife’s phone, and she’s still very happily using it. So are a couple of Digital Seniors clients whose phones I’ve installed it on.

Finding the app in the Play Store is tricky because several other apps have Simple Launcher in their name. Look out for the light blue icon:

The launcher has a main launch page (on the left below) where you put nine most-used apps. Additional commonly used apps can be put on a page (or pages) you can right-swipe to. While the important apps will be put on the launch page, all of the apps installed on the phone are available by swiping below the launch screen – another version of the App Drawer.

Clicking the EDIT link puts the pages into edit mode. In this mode you can add and remove app icons and phone numbers. 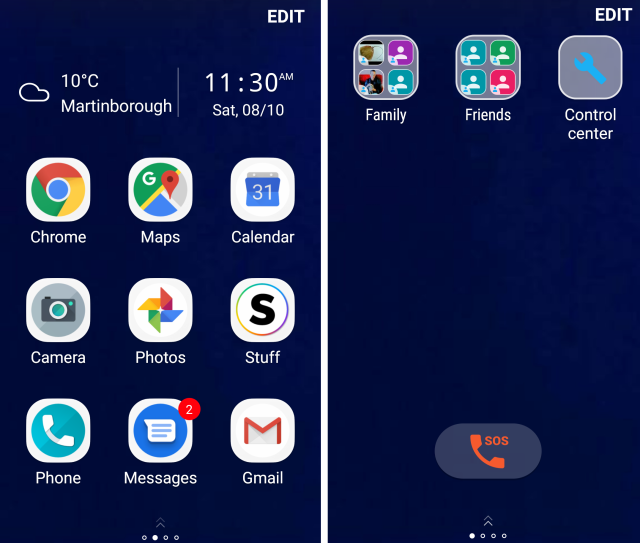 Swiping left takes you to the phone contacts screen, shown above on the right. Here you can put instant-dial contacts for family and friends. 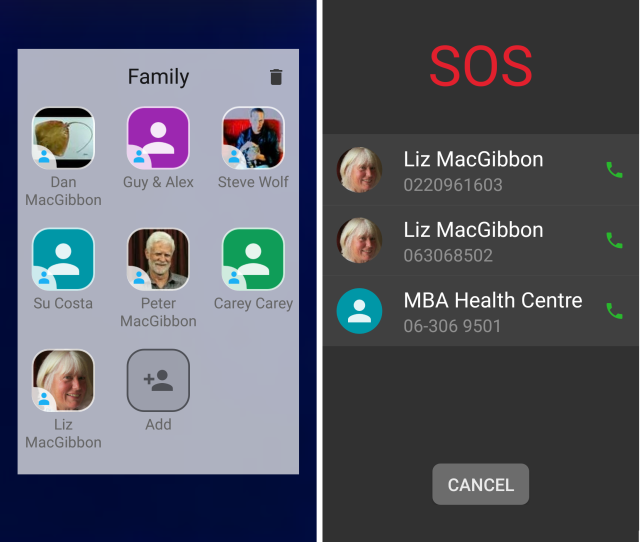 The screens above show the breakout pages from the Family and SOS icons. One click on these icons starts the phone call – no need to separately launch the phone app. I wish I could have included the emergency 111 number in the SOS calls, but this isn’t possible. Simple Launcher sources phone numbers from the Contacts app and I haven’t found a way to add 111 to Contacts. (Any suggestions?) 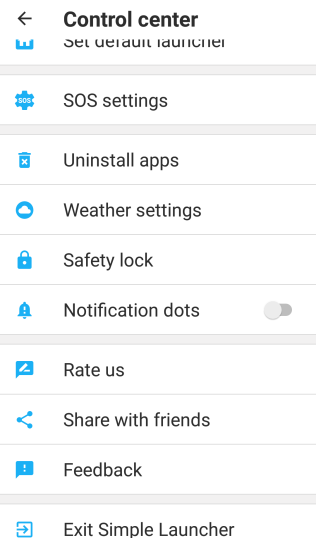 The phone contacts/SOS page also includes a Control Center (see its menu on the right).

Generally I think Simple Launcher is great phone improvement for anyone whose needs are relatively simple. It’s not for me – I have many apps and like to group some of them in folders. I use the Nova Launcher.

Simple Launcher looks particularly good on a plain background such as I have here. It won’t look so good against social photos wallpaper, but even then it will be easier to figure out than most launchers.

I do have a couple of niggles. One is the inability to include the emergency 111 number, but to be fair, this is probably also the case with all other launchers. They probably have to source any easy-dial numbers from the Contacts app. It is of course possible to make the 111 number prominent elsewhere – e.g. on the lock screen, but that requires you to open the phone app separately and dial manually. Also, if you have been actively using your phone, it’s hard to get to the lock screen, because the phone may not yet have ‘gone to sleep’.

Another quibble is that it is not possible to long-press on app icons and move them around. It’s a nuisance, but not a deal-breaker.